Manuel Tapial, one of the three Spanish activists who were on board the Mavi Marmara, runs his own Facebook account. There we can find multiple examples about his political ideology. Now I'll provide nine of those examples through images collected during the past days. Click on the images below to watch them in high resolution. Translations are available, made as accurate as possible and between quotation marks.
1.- Manuel Tapial suspects his cell phone has been hacked by Israel, which he calls "Israhell". The text marked as #1 reads as follows:
"Erase my cell phone number from your datebooks, they've hacked it (Israhell?), and it doesn't work. I ask myself whether Movistar [a Spanish mobile phone operator] hasn't passed my [personal] data unlawfully."
Comments concerning such a suspicion support Manuel Tapial's hypothesis. 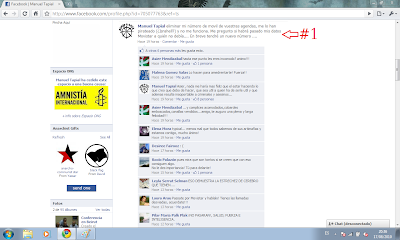 2.- Manuel Tapial's friend Ali Ebubekir Tockan tagged Manuel Tapial in a photo uploaded to Tapial's account. The photo consists of a meal. The text in English marked as #2 reads:
"As of February 2010 became the world's population 6.805.000.000. But, only 560 people made the journey aboard the Mavi marmara and able to eat at Gaza Cafe's famous meatball :)".
This is curious, isn't it? I mean, the so-called Gaza flotilla was officially intended to provide Gazans with food (among other help), but were in fact the activists providing themselves with tasty banquets instead of keeping as much food as possible in order to deliver it throughout the Gaza Strip? 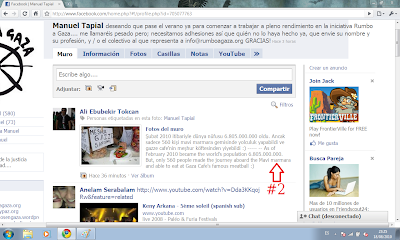 3.- Manuel Tapial has been showing concern publicly regarding the humanitaran situation in the Gaza Strip, but a friend of his own who signs as Fdlp Palestina (a clear reference to the Democratic Front for the Liberation of Palestine) uploaded a photo which shows Cuban dictator Fidel Castro meeting D.F.L.P.'s founder and leader Nayef Hawatmeh. Manuel Tapial himself was tagged in the photo, and his name (marked as #3) appears when you put the cursor above the photo. What about Tapial's concerns regarding the Cuban people, which is ruled by Fidel Castro? What about Tapial's concerns regarding the 22 Israeli high school students murdered by the Democratic Front for the Liberation of Palestine during the 1974 Ma'alot massacre? Oh, wait a minute; Manuel Tapial supports Palestinian terrorism against innocent Israelis, as he himself declared once. 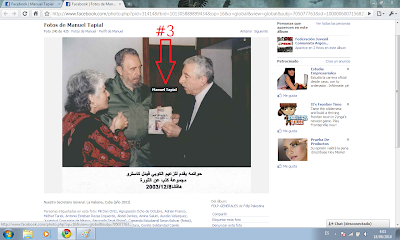 4.- Manuel Tapial relies on Gara's official website to spread his political ideology (the link is marked as #4). Please note that Gara is a Basque newspaper which has been showing support for the terrorist organization E.T.A. since it was first published in 1999 succeeding Egin, another Basque newspaper supportive to E.T.A. which was banned in 1998. 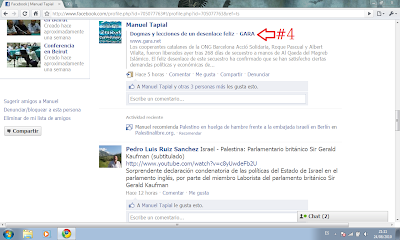 5.- In a photomontage marked as #5 and uploaded to Manuel Tapial's account by Osama Qashoo, one of Tapial's friends, Paul the Octopus can be seen predicting Hezbollah's victory over Israel. It's a clear message of support towards Hezbollah. What about Tapial's concerns regarding the suffering the Lebanese people had to endure during the 2006 Lebanon War, which was unnecesarily prompted by Hezbollah through the Zar'it-Shtula incident? 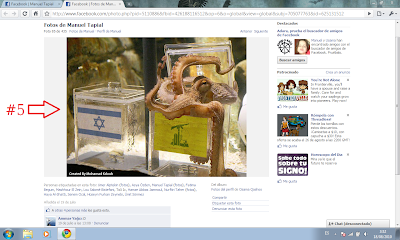 6.- A Manuel Tapial's friend who signs as Palestina Libre (which means Free Palestine) uploaded an image (marked as #6) to Tapial's account which explicitly minimizes the adverse effects derived from the rocket attacks on Israel by Hamas and other terrorist organizations. What about Tapial's humanitarian concerns about Sderot's 45% of children under the age of six, 41% of mothers and 33% of fathers who were diagnosed with Post-Traumatic Stress Disorder? Does Manuel Tapial remember the drawings by African children about war? Please notice, Manuel, that according to a 2007 account by a seven-year old girl from Sderot, Someone has been wounded. 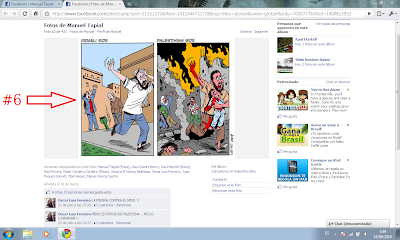 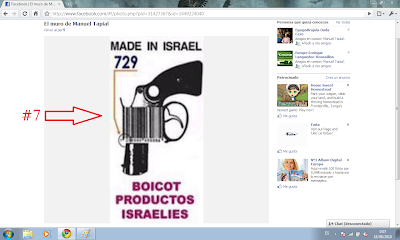 8.- Manuel Tapial's friend John Erik Hanson uploaded this drawing (marked as #8) to Tapial's account. It shows the way in which happened the boarding of the Mavi Marmara by the Tzahal from the activists' perspective, in spite of the proofs against the activists and the lack of evidence against Israeli soldiers. 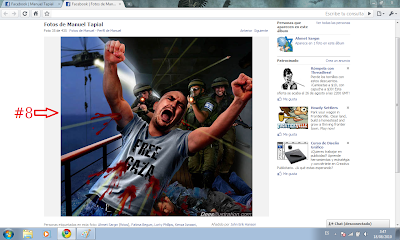 9.- Manuel Tapial linked a videoconference by David Duke. Duke's videoconference is intended to criticize Israel, Zionism and the Jews as a whole heavily. Please note that David Duke, an American citizen, is a white supremacist, a fomer Ku Klux Klan's member and an anti-Semite. And to have linked the video can't be considered the result of Tapial's ignorance, because he himself indicates this fact. The first comment under the link, written by Tapial, reads as follows:
"Be careful because this guy is a nazi, although what he says makes sense, it's necessary to know who he is."
Here is Amin Shiranai's answer to Manuel Tapial, being Amin one of Tapial's friend (it's the second comment under the link):
"I don't care about him being a nazi, this guy tells the truth, the fucking truth, the Zionists have trippled nazis' crimes, so I really don't care about what he thinks.."
Please notice Aupa Towanda's and Mukkader Bauer's answers to Tapial and Shiranai, rejecting David Duke in Spanish and English, respectively (third and fifth comments under the link, respectively). Both Aupa and Mukkader are Tapial's friends.
Tapial's explanation of the linked videoconference, which is marked as #9, reads as follows:
"Recommendable the visualization and spreading of this video ..." 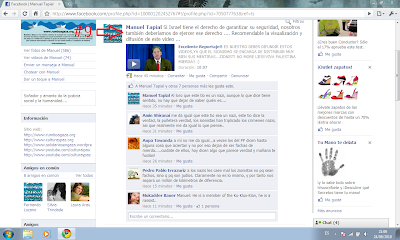 Posted by Midtskogen at 23:05 2 comments: Links to this post

Manuel Tapial and terrorism (I).