As shown before (read here and here), not only what the Spanish mainstream media tells must be taken into account in order to understand the way it treats Israel; for this purpose, what the media doesn't tell is also important. Misinformation and deception don't only come from half-truths, exaggerations and fabrications, but also from deliberate omissions.

Does it make sense when it is usually alleged that a hypothetical Palestinian State would be created in order to serve precisely as a national homeland for the Palestinian people? If the Palestinian refugee problem is so important for the Spanish media from a humanitarian perspective, why not to denounce Abdullah and for this future policy he is announcing?

Is it maybe because Abdullah Abdullah is Palestinian instead of Israeli and works for the P.L.O. but not for Israel?
Posted by Midtskogen at 18:03 2 comments:

Isaac Querub is the president of the F.C.J.E. (Federación de Comunidades Judías de España or Spain's Federation of Jewish Communities). He was interviewed by the Spanish daily El País and claimed that Holocaust denial should constitute a punishable offense in Spain (which was the case before a 2007 ruling by the Spanish Constitutional Court).

1.- This was Manuel Tapial response:

"And because of Israel denial, do they want to imprison us for that? Put me the first in the line." 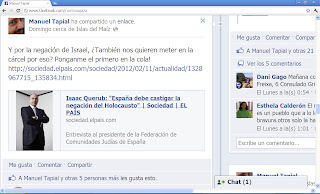 "The Spanish state should expel every Jew who doesn't recognize the Palestinian holocaust."

Please notice such an example of anti-Semitism: Jews should be expelled if they deny a Palestinian holocaust, a fact which isn't happening nor happened before in strictly historical terms. And he is referring to those Jews located in Spain but not to the Spaniards as a whole, which means he is singling them out. Just because they're Jews? 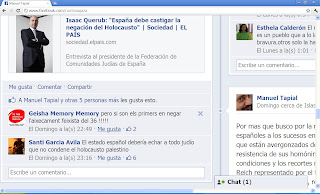 3.- In this third screencapture we can observe how Manuel Tapial likes Santi Garcia Avila's comment. Does that mean Manuel Tapial would support such an anti-Semitic measure? Please remember what the Spanish laws tell about this in the article 510 of the Penal Code. 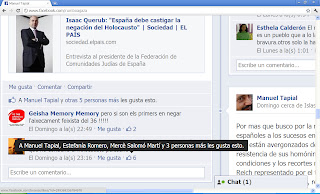 Posted by Midtskogen at 23:21 No comments: