On Sunday, August 15, 2010, I wrote an article under the title Manuel Tapial and terrorism. Among other things I denounced Manuel Tapial's support for terrorist organizations such as Hamas, which he compared with the armed resistance against fascist Francisco Franco and that against the nazis. I also explained how his language was comparable to that of E.T.A., the well known Basque terrorist organization.
Manuel Tapial was on board the Gaza flotilla when it was stopped by the Tzahal almost one year ago. The organization behind it was the I.H.H., a self-proclaimed Turkish N.G.O., which is also supported by Manuel Tapial. And recently, we could see the Spanish activist meeting Hussein Orush, one of I.H.H.'s representatives, as shown in the image below, uploaded from a Manuel Tapial's Facebook contact (Manuel Tapial is at the left, Hussein Orush is the second from the right). 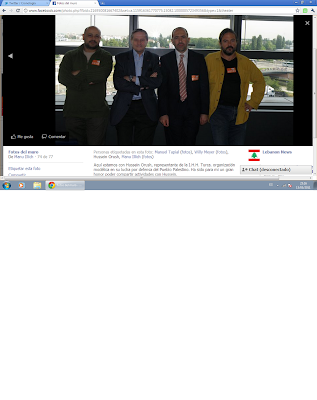 The text under the photo reads as follows (translated as accurate as possible, between quotation marks):
"Here we are with Hussein Orush, representative of the Turkish I.H.H., a model organization because of his fight for the defense of the Palestinian People."
Can the I.H.H. be considered a model organization? No. It's in fact an organization linked with terrorist activities, according to the Intelligence and Terrorism Information Center as well as the Danish Institute for International Studies. Please read their linked reports and you will be able to understand what can be actually seen in the upper photograph: Manuel Tapial meeting a representative of a criminal organization.
Posted by Midtskogen at 12:37 No comments:

Israel never made concessions, according to Eugenio García Gascón.

This time his assertions have been shocking and even insulting. In an article published on Friday, May 20, 2011, under the title Concesiones (Concessions), Público's journalist Eugenio García Gascón wrote about Ehud Barak's statements declaring that Israel is strong enough to make concessions.
According to Eugenio García Gascón, Ehud Barak's intransigence derived on the Second Intifada in 2000, when the truth is that precisely in 2000, the aforementioned Israeli politician, then the Prime Minister of his country, proposed a peace plan consisting of the creation of a Palestinian State with sovereignty over many sectors of East Jerusalem as its capital. The Palestinian response consisted of starting the Second Intifada. Is Ehud Barak responsible for the Palestinian failure to continue the negotiations instead of murdering Israeli civilians as the Palestinians actually did?
The journalist describes how Israel has never made concessions by arguing that Israel's withdrawals from Lebanon in 2000 and the Gaza Strip in 2005 were made in order to avoid casualties to happen within those territories, but he fails to explain why Israel didn't withdrew also from the West Bank (where soldiers and settlers were also killed; just remember the so-called Ramallah lynching or the more recent Itamar killings) or why Israel sent its soldiers to Lebanon in 2006 and the Gaza Strip during the operation Cast Lead at all.
The truth is that Israeli withdrawals from Lebanon in 2000 and the Gaza Strip in 2005 were in fact concessions. The aforementioned peace plan as proposed by Ehud Barak was intended as a concession, as well as Israel's withdrawal from the Sinai in 1957 and in 1982 again were also concessions. And what about Jewish acceptance of the United Nations-proposed Partition Plan of November 29, 1947, intended to create two States for two peoples and to bring Jerusalem's inhabitants the opportunity to decide by themselves what of those States did they want to belong to through a referendum? Was not that a concession, Eugenio?
Posted by Midtskogen at 00:12 No comments:

As explained many times before, Manuel Tapial was one of the three Spanish activists who were on board the Mavi Marmara when the vessel was assaulted by the Tzahal. I spent some time trying to explain how this activist thinks regarding Israel and the Jews to the point that he declared once that my coverage of his political activities on Facebook would be treated as a punishable offense in the form of threats. But since he should be worrier than me regarding the law, I'll continue to summarize his ideas. Translations are made as accurate as possible, between quotation marks.
1.- Manuel Tapial works for a platform called Rumbo a Gaza or, as it is known in English, Ship to Gaza. Apparently, some members of the organization and their vehicles were checked by the Civil Guard (a Spanish national law enforcement agency which is part of the military). Please notice that such a measure is in fact one of the Civil Guard's role, but let's see how Manuel Tapial overreacted (#1):
"What has happened to our fellow activists has no precedents. A legal campaign in which the volunteers are harassed by the Civil Guard, their belongings are 'photographed' and 'manipulated' far off their presence and everything indicates the harassment has just begun!! I call the media to ask the Government why is this harassment happening!!!" 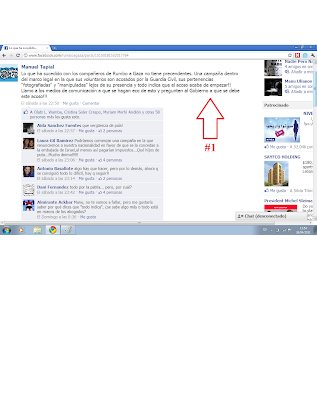 2.- Answering one of his contacts on Facebook, Manuel Tapial wrote (#2):
"Ackbar, the situation HAS BEEN ILLEGAL as they have confirmed to me. All of this is in the lawyers' hands and this week there will be fresh news. We'll report soon. I reiterate that WE ARE LAW-ABIDING!!!!"
Again, Manuel Tapial has failed regarding the law, since it is not illegal for the Civil Guard to check vehicles. In fact, there has been no such "fresh news" regarding lawsuits against the Civil Guard for now. And now please notice what a Manuel Tapial's contact wrote (#3):
"Spain's main interest is not a humanitarian campaign but the weapons, 9 dead people on board the Mavi Marmara were nothing for them, did in fact the media report about it? Absolutely not! It's not interesting the harassment the members of the new freedom flotilla are experiencing as well... but for that we have to fight. PALESTINE!!!"
I don't know where this individual was between May and June, 2010, but yes, the media reported about the Mavi Marmara massively... and from an intentional anti-Israeli perspective. 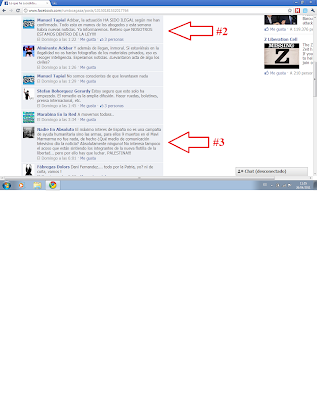 3.- As Manuel Tapial warned (#4):
"The next week there will be a response due to the situation they have created, we have ceased to recognize the Spanish government as an interlocutor for being actively favourable towards the state of Israel."
As commented before, there was no response, while we still see how the activist tried to promote some sort of conspiracy theory which was answered by two of his contacts as follows (#5 and #6, respectively):
"[This was] the response by the fascist apparatus which rules the Spanish State".
"What has happened to you is nothing new in kaosenlared [an extreme left webpage] the threats, the criminalization and detentions of some of some collaborators happen constantly..." 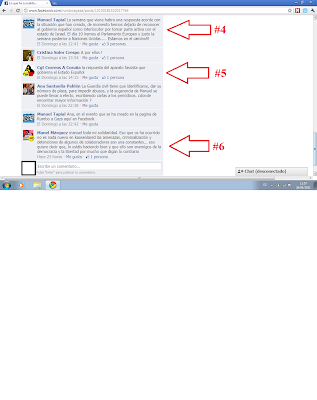 4.- But such a theory didn't end there. Manuel Tapial even suggested that the Spanish Government shoud be tried for treason and conspiracy in favour of a foreign State, taking into account what the Civil Guard supposedly did (#7). Cristina Soler Crespo and Manuel Tapial wrote about the issue as follows (#8):
"Your lawyer should verify whether there is some way to denounce that offense, before an International Court or the National Court or something..."
Manuel Tapial's answer was:
"We will do so, Cristina, we will do so... ;)" 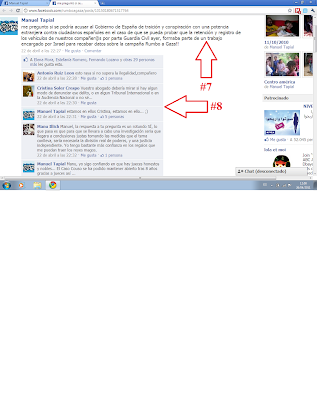 5.- Manuel Lozano added the following:
"Since there are Mossad agents at the Spanish airports registering Spanish citizens IN SPANISH SOIL before embarking to go to Israel, I already believe everything."
This is clearly indicative of how pro-Palestinians in Spain are vulnerable to anti-Israeli conspiracy theories. 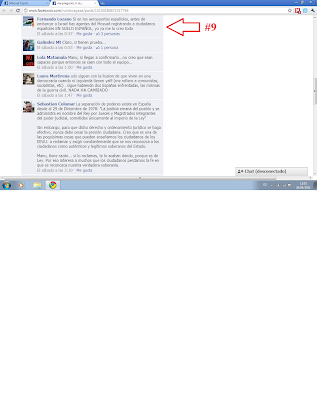 6.- Manuel Tapial finally created a Facebook event in favour of Palestine and against the Civil Guard. At the end of his explanatory text (#10) he commented:
"Let's avoid other GAL!!!"
This is a clear and very offesive reference about the G.A.L. (Grupos Antiterroristas de Liberación or Antiterrorist Liberation Groups), which were formed and maintained by the Spanish governmental authorities between 1983 and 1987. More information about them here.
Maybe another overreaction after being notified by his lawyer he wouldn't be able to denounce the Civil Guard? 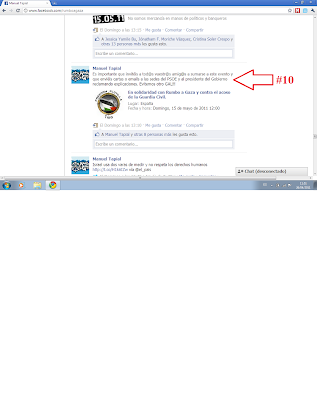 Posted by Midtskogen at 18:52 No comments:

On Sunday, May 1, 2011, Israel commemorated the 6,000,000 Jewish victims of the Holocaust through the Yom HaShoah, i.e., the Holocaust Day. The next day, Público published an article by Eugenio García Gascón titled Antisemitismo (Anti-Semitism). This journalist's double standard and lack of historical accuracy is more than evident in this article. Please pay attention to the first paragraph (translated as accurate as possible, between quotation marks):
"Yesterday night, during a ceremony held at the Yad Vashem, the Holocaust Museum in Jerusalem, prime minister Binyamin Netanyahu told that the world hasn't learnt the lesson derived from the Holocaust, and compared the Holocaust, that is the Second World War nazi actions against Europe's Jews with the current Iranian threat. It's something which seems to be disproportionate and out of place but all Israeli leaders talk endlessly about Iran, once they see a microphone within their reach, and Netanyahu is not an exception, although Iran is a country which never has attacked anybody, unlike Israel, and in exchange it had to endure aggressions."
So Eugenio García Gascón pretends to make his readers to believe that Iran never attacked anybody while Israel did, and that Iran suffered attacks. The truth is that Iran attacked others in the past and is currently doing so. Its victims include Iranians (real or alleged political dissidents, homosexuals, adulterous and raped women, and so on), Israelis (who suffer attacks by terrorists organizations supplied with weapons by Iran), Palestinians (who suffer repression by the aforementioned organizations) and the Red Crescent (whose ambulances were used by the Iranian Revolutionary Guard to smuggle weapons into Lebanon).
Meanwhile, aggressions against Israel are not mentioned by Eugenio García Gascón as the main cause of Israel's defense policies. It's not also told by the Spanish journalist how, while Iran was being attacked by Saddam Hussein-led Iraq between 1980 and 1988, the Persian State received Israel's help; in spite of this, Iran refused to re-establish ties with Israel.
The journalist ends his article by suggesting that complete Israel's withdrawal from the Palestinian territories would stop anti-Semitism worldwide, taking into account statistical data which shows that anti-Semitic acts dropped in 2010, a year after the operation Cast Lead ended. The truth is that Israel withdrew once from the Gaza Strip and such a concession only led to an increase on terrorist attacks by Hamas (an anti-Semitic organization), while reading journalists such as Público's Eugenio García Gascón should be enough to understand that media bias against Israel seems to be one of the actual and main reasons behind anti-Semitism.
Posted by Midtskogen at 19:53 No comments: