Manuel Tapial is a Spanish pro-Palestinian activist who was on board the Mavi Marmara when this ship was assaulted by Israel's Tzahal in 2010. Though he declares himself a pacifist, he has a long history of support for terrorism (read here and here), which constitutes a criminal offense according to the Spanish Penal Code.

Now let's read how his self-procclaimed pacifism is contradicted by what he wrote (translated as accurate as possible, between quotation marks):

1.- On Thursday, January 12th, 2012, Manuel Tapial wrote the following:
"The tremendous shamelessness of the European political class before the occupation of Palestine, could, in the medium term, reverse the increasing feeling of struggling lawfully and in a pacific way which characterizes the Palestinians when achieving their legitimate rights..."

Manuel Tapial seems not to pay too much attention to what has been going on in the Middle East for the last years. The truth is that the way the Palestinians are struggling have been consisting mainly of this. 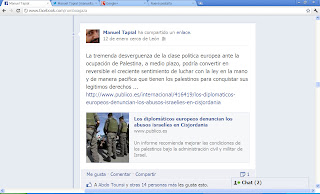 2.- Manuel Tapial himself suggests to harass Israeli citizens worlwide just because of their nationality (which is also punishable under Spanish laws), as he wrote lately from Nicaragua:

"The same [wall] Israel will use to isolate the Palestinians is the one the world's civil society should build to isolate Israel and its practices in order to make them realize their criminal attitude is not tolerable! I'm happy to be in Nicaragua and to see that Israeli citizens here are asked and questioned constantly about what they do to the Palestinians, don't let this people even a single minute of rest!" 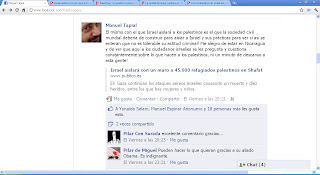 3.- On Monday, December 26th, 2011, Manuel Tapial published an article in his own blog. He later linked to his article via Facebook, as shown in the screen capture. What he wrote in his blog includes the following:

"Under the present scene, all indicates we are called to write the History of our epoch. New persons will have to make them known publicly this year around the new struggles which appear before us (..) emulating Rosa Parks, Angela Davis, Ulrike Meinhof, Leila Khaled, Steve Bico, Fonseca, Salvador Puig Antic[h] and many others,..."

Of those individuals mentioned, at least two, Ulrike Meinhof and Leila Khaled, are well known terrorists. Ulrike Meinhof was part of the R.A.F. (Rote Armee Fraktion or Red Army Fraction), a West German extreme-left terrorist organization, while Leila Khaled was the first known woman who hijacked a civil passenger aircraft, in this case on behalf of the Popular Front for the Liberation of Palestine.

Indeed, daring to compare those two terrorists with Rosa Parks, who is a symbol against racism, is insulting.

Manuel Tapial's link in Facebook was answered by one of his contacts in the social network: Sarai Costas Silva. She commented the following:

"Ulrike Meinhof, extrajudicially executed by the 'Federal Republic of Germany' (the specific executor organism is still to be determined; maybe their intelligence service?) at the Stammheim prison in 1977."

And under this comment, Sarai Costas Silva wrote another one:

"Also executed by the Federal Germany's security apparatus were, in Stammheim, Andreas Baader, his girlfriend Gudrun Ensslin, and Jan Carl-Raspe. The same night during which these three executions were carried out, they tried to do the same to Irmgard Möller, but they failed.

All of these were the leaders of the first generation of the Red Army Fraction. Earlier, another of its member, Holger Meins, had been executed in prison, leaving him dying from starvation (he had begun a hunger strike)." 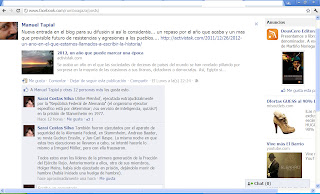 4.- As we can see in the screen capture bellow, Manuel Tapial liked Sarai Costas Silva's first comment. Does it mean he really believes in such an absurd conspiracy theory about West German extrajudicial executions of prison inmates? 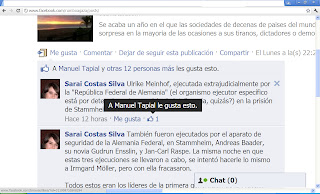 5.- Finally, we can see here how Manuel Tapial supports another well known terrorist: Venezuelan-born Ilich Ramírez Sánchez, also know as Carlos the Jackal, who is currently serving life imprisonment sentence for the murders of two French security officials and a Lebanese contact, among other crimes. The multiple crime happened in Paris in June 27th, 1975. He was apprehended in Sudan in 1994. 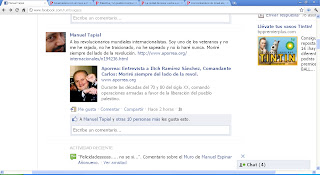 Posted by Midtskogen at 18:54 No comments: Links to this post